At one of the rodeos he attended one of the clowns didn’t show up and he was talked into taking his place.  A passion was born.  His career took off in the mid 1960’s, soon after he got his membership in the Professional Rodeo Cowboys Association, when he became the first rodeo clown from Utah.

His many years with the PRCA took him throughout Utah, the western and central states and Canada.  He worked with the Bar T Rodeo for many years, but was especially excited when he was able to work his hometown rodeo – Ogden Pioneer Days.  He also worked college and high-school rodeos and was invited to clown at the National Finals.

He was famous for being “the man in the barrel.”  He had many jokes and acts, two of his favorites were with his trick pony “Cappy,” and his dog “Toby.”  Roy never hesitated to jump in front of a bull to keep the cowboys safe.  He never missed an opportunity to help a young person get into the rodeo business, including his two sons and two grandsons who followed in his footsteps as contestants and clown/bullfighters.

Ray probably work at least 630 rodeos during his successful 25-30 year career.  He was a proven leader, mentor and master of his craft, and was paid tribute to for having a major influence in many lives as well as the sport of rodeo. 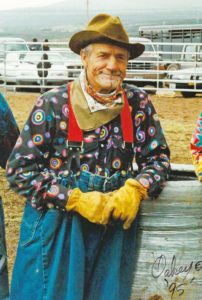